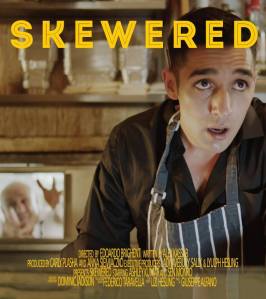 Skewered is a comedy-drama short film which focuses on a failing Turkish restaurant run by Emre and his son Mehmet, in East London. Emre is an easy-going, middle aged, chef whose sole concern is keeping the restaurant open. Mehmet is young, stubborn and fiery – he has grown to despise the neighbourhood he grew up in and wants to use the restaurant to fight the changes that are occurring. Their relationship and livelihood come under threat when a hip new competitor opens nearby. Emre believes they must adapt to their surroundings; Mehmet instead takes matters into his own hands, but achieves much more than he anticipated. Skewered poses questions about gentrification and authenticity, in a modern, London setting.